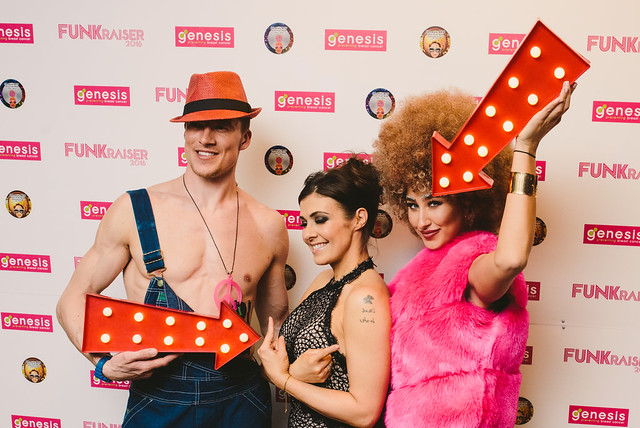 Soap stars and scientists were among those who turned out to support Genesis as we marked our 20th anniversary this weekend at the Hilton in Manchester.

As you know, we are the UK’s only charity entirely dedicated to the prediction and prevention of breast cancer, and we celebrated our landmark birthday with a FUNKraiser Ball on Saturday night. After so much hard work and meticulous planning, it was an absolute joy to witness its fruition as we journeyed through the era of FUNK! We are completely thrilled to let you know that we raised the colossal amount of just over £85,000

Coronation Street star Sally Dynevor, who plays Sally Metcalfe (née Webster) in the soap and is a long-standing patron of the charity, attended on the night, and was joined by her co-star Kym Marsh, who plays barmaid Michelle Connor.

As part of the event, guests were treated to a three-course dinner and entertainment from Radio X and BBC Radio Manchester favourite Clint Boon, with Capital FM presenter Sally Hudson compering the evening.

Sally Dynevor, who is celebrating 30 years on the ITV soap this year, said: “Genesis is extremely close to my heart and I’m incredibly proud to have watched it grow from a small, local charity to one that is a major player in the fight against breast cancer, both nationally and internationally.

“It’s a very exciting time for Genesis and I’m looking forward to watching it become closer to achieving its goal of creating a breast cancer-free future.”

Our chairman and founder Lester Barr said: “As a charity, Genesis continues to carry out ground-breaking research and our team of experts are committed to identifying new ways in which the disease can be predicted and prevented.

“We’d to thank everyone who came along to support us on Saturday and celebrate our 20th year – we’re now looking forward to the next 20 and are confident that one day we will achieve our ultimate goal.”

Genesis may be 20 years young, but the fight against breast cancer is still the driving force behind our vision. As we evolve into our new name of Prevent Breast Cancer, we especially can’t wait to see what the next 20 years brings, but together, we will make breast cancer a preventable disease for the next generation.

Previous post:
Trouble in France when not on a diet – Part Deux