The team at Prevent Breast Cancer always enjoy working with university RAG societies, and seeing the fun and creative ideas the students come up with to raise money. Leeds University RAG came on board this year and decided to support us by taking on a epic cycling challenge – over 1000km from Leeds to Prague!

They organised the entire event themselves, put on extra fundraising activities in the months leading up to the ride, and on Monday 19th June 2017 they set off on their way. We followed their progress on social media, and cheered with them from afar as they arrived in Prague 9 days later, having raised a truly incredible £28,000! 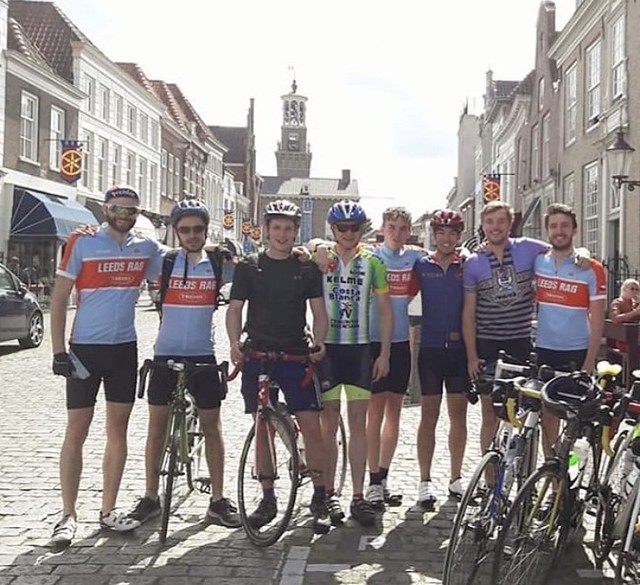 We caught up with Adam and Lucy from Leeds RAG after they’d returned home, to ask about their experience of fundraising for us.

“Every year Leeds RAG runs several ‘endurance’ challenges, of which Pedal to Prague is one (and the best!). The journey covers over 1,100km, travelling through the Netherlands, Germany and finishing in Prague, lasting 9 days. Around 40 people signed up to the challenge, each with a minimum target of raising £400 for their participation.

We chose Prevent Breast Cancer as it targets something which most people in the group felt strongly about, with breast cancer affecting so many people. In particular, Prevent Breast Cancer tackles the problem from a different angle to many other cancer charities, prevention, meaning we felt like we could make a real difference. We thought that fundraising for this charity would help raise awareness of preventive measures such as gene testing and screening. Their transparency was another reason for choosing them; it’s so good to know exactly where your money is going!

With so many people looking to raise money, it was unlikely that social media donations alone were going to be enough to achieve £400 each, especially as many of us have taken part in fundraising activities previously, so we had to look into different ways in which money could be raised. Participants organised BBQ’s, leg waxing, bag packing, bucket shakes and car boot sales. One student, Harriet, bravely arranged a sponsored haircut and donated the cut hair to the Princess Trust.

Being a cycling challenge, ‘spinathons’ accompanied by bucket-collecting seemed like an appropriate way to raise money. At first we did this outside of the university union, but students aren’t the best placed to donate lots of money! Instead, we contacted Leeds rail station and asked if we could do an activity there to raise money, and they were more than happy to help. The university gym provided us with a couple of old spin bikes, and the charity sent over some buckets, t-shirts, a banner and some tutus (which went down a treat) and we were ready to go. On the day, 6 of us turned up and cycled for 8 hours straight, talking to members of the public and collecting donations. The response was really positive, with the station saying that normally £200-£300 could be expected in a day – we totalled over £930!

Megan, Oli and Phil looking fresh at Leeds station – must have been early in the day!

We are so thankful to everyone at Leeds RAG, and all the students who took part in Pedal to Prague, for their incredible support and commitment.
If you are part of a RAG society and would like to raise money for Prevent Breast Cancer, please contact us.

Next post:
Can regular drinking cut the risk of diabetes?